June 08, 2016
Yes, yes, the durian season is back this June! And with it, came the trending craze called, “Durian Cendol”. Located in Seksyen 24, Shah Alam (Malaysia), this humble little food stall somehow earned its name on newspapers and blog sites of famous Malaysian bloggers all over the country. I wasn’t too attracted to the idea initially, but after it started appearing on multiple articles, blog posts and just about everywhere around me, I decided to investigate what all this hubbub was about. 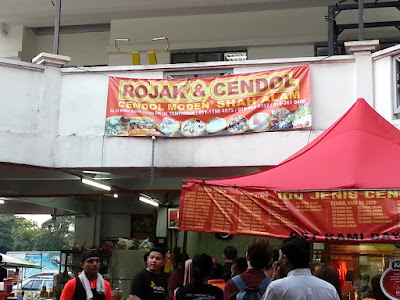 Standing at the end of the line at 6.15pm on a Thursday, I anticipated that it would be a long wait, due to the long queue that I was joining. Since they only opened at 6pm, this was ridiculous! Close to two hours later, as the sun set and the night turned dark, I finally got my bowl of durian cendol. Well, at least I was entertained by the friendly and fun staff while I was on my two hour long journey to the finish line. I would have taken a better picture of the red shirt guy if he didn't move so much! haha. 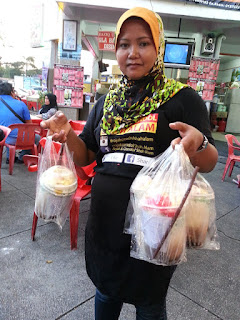 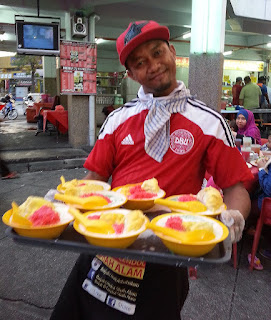 What is durian cendol, anyway? 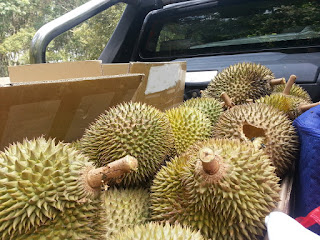 For those of you who are neither familiar with the term “durian”, nor the term “cendol”, read these paragraphs. Durian is a fruit found mainly in the South-East Asia region. Known for its pungent smell and creamy yellow flesh, durian also has a spiky, thorny shell, much like the hairstyle of a punk rocker, really. You’ll have to be careful when handling a durian because those spikes are NOT friendly! In fact, it takes a certain amount of skill to be able to cut open and enjoy a durian properly. And yes, if you look closely at the picture, one of the durians had been attacked by squirrels. Even THEY know what's delicious! 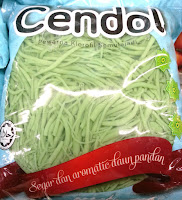 Cendol. There are two ways to describe what this is. That’s because it is used to call both the ingredient of a dessert as well as the dessert itself. Cendol (ingredient) is the name of short, green, cylindrical tubes made of green bean flour, pandan leaves and water, as well as other additional items. In contrast, cendol (dessert) is a traditional South-East Asian dessert. It is know by many names and used in different ways in various Asian countries; but in Malaysia, cendol is typically served with shaved ice, coconut milk, “Gula Melaka” and cendol (ingredient). Some versions even include corn, red bean, and peanuts. Therefore, combining “durian” and “cendol” gives you…Durian Cendol!

If you want to try making your own cendol:
1. Get yourself a “cendol maker

” and an “ice shaver

” from Amazon.com
2. And head on over to one of these sites to get the recipe:
- The Wong List: http://thewonglist.blogspot.my/2011/12/making-orignal-chendol.html
- Asian Inspirations: https://asianinspirations.com.au/recipe/cendol/

Anyway, here’s the important part, THE TASTE.
Was it worth it? Well, I wouldn’t go crazy over it, but it was a pretty good idea to combine durian and cendol. 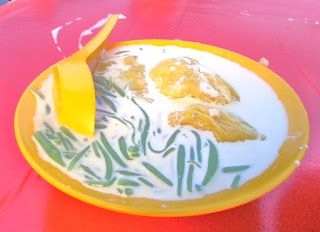 Bathing in a milky white liquid of coconut milk, shaved ice and gula Melaka, the bright green cendol peaks its head out to greet you. Alongside it in this White Sea, the “golden treasure” (durian) bares its smooth and shiny yellow flesh to entice you to eat it. Alright, I was exaggerating. Let’s get down to business.

Although having the wonderfully infused aroma of durian, the coconut milk was quite sweet to my taste and the cendol wasn’t too special. But, here comes the genius behind this sweetness! The durian variety that they used that day (apparently they use different varieties depending on availability) was Durian Tembaga or D118. And as good durians should be, it was rich and creamy, sweet, but with a tinge of bitterness. It was this bitterness that was able to cut through the sweetness of the coconut milk and bring out something truly awesome. Asian cuisines are usually stereotyped as having a balance of tastes and flavours (sweet, sour, salty, etc.). This particular dessert was one proof that secured that stereotype even more. The balance between the sweetness of the coconut milk and the bitterness of the durian made them the perfect match.

As a plus point, they really did use fresh durian for the dessert. I personally saw them cracking open durian shells right before serving. Vkeong.com, a Malaysian blogger, was right!

So, how do you get your bowl of cendol from this crazy, trending place? 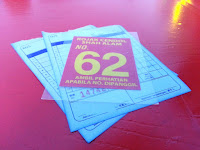 Get to the end of the line (which never seems to shorten or lengthen, hmm…strange) and start queuing. Then, make sure you get a ticket number at the end of your ‘obliged’ queuing period, and get a seat somewhere. No worries, the war has ended, they’ll bring your order over to you by calling out your ticket number (more like shouting out your number, since the place was so huge), and ENJOY!

As usual, “the camera eats first!” 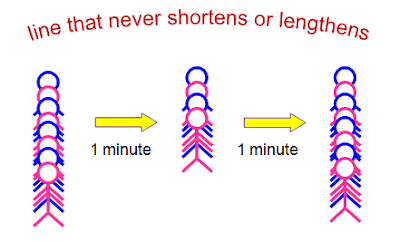 Cendol – I’ve covered this in the article above. Just look for “What is durian cendol, anyway?”

Durian Tembaga – It’s the Malay name for a species of durian found in South-East Asia. Tembaga is the Malay word for copper.

Read what other bloggers & online articles say about this trending craze:
VKeong.com: http://www.vkeong.com/durian-cendol-rojak-cendol-shah-alam/

Ps. Come with a friend or two so that you can swap between each other and divide the two hour long waiting time. Plus, it’s just more fun that way!