Sparkling Umeshu – A Delicious Drink in a Tiny Can

I’ve been quite interested in Japanese products lately, so you may notice my many posts about food from Japan. However, as some products come directly from its homeland, there is but one problem. They’re all labelled in Japanese! If you’re lucky, you may be saved by the add-on sticker on the side of the product that gives you a description in English, although it probably won’t be as detailed as you may like it to be.

For this adventure, I would like to introduce the Sparkling Umeshu by Hakutsuru (the actual name is Puru Puru Sparkling Zeri Umeshu, ‘zeri’ meaning jelly). It comes in a tiny 190 mL green can but is packed with lots of goodness, despite its size. I found it at the alcohol section of a supermarket which sells Japanese alcohol, and I just couldn't resist taking it home with me due to my curious nature. I don’t know why, but I also have a thing for tiny cans of drinks. Maybe it’s because they’re just so darn cute!

Now, let’s see how it tastes: With a whiff of alcohol and the scent of plums as soon as you open the can, you may think that it is high in alcohol. Hard as it may be to believe, it is only 5% alcohol. The sparkling umeshu appeared to be a fizzy mixture of jelly and liquid with a deep yellow colour, much like an oak-aged chardonnay wine. Notice the bubbles and you may think that it’s Champagne. Confusing right?
As for the actual taste, it had a sweet and sour note, but it also gave me a nostalgic sense of salty plums within it. This somehow reminded me of those dried, preserved plums that you can get at a Chinese shop which are both super sour and super salty but go well into a glass of iced lime juice, perfect for a hot sunny day. 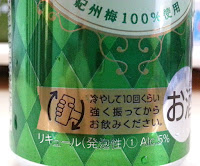 As a drink, the sparkling umeshu also had an interesting texture, thanks to the smooth and extremely soft jelly in the drink. But, the problem was that for a can so small and the opening equally smaller than usual, it’s no wonder that the slippery, bouncy, and not to mention quite hugely cut jelly had a hard time getting out of there. Only after I attempted to pour it out did I realise that I was actually supposed to shake the can 10 times or so BEFORE opening the tab. It actually says it right there at the front of the can, and with a picture too. I can’t believe I didn’t notice it. Well, it’s not like I can read Japanese, right? Yet, anyway.

Overall, the drink was delicious and I thoroughly enjoyed it. It was definitely worth what I paid for. When you see a product that looks interesting to you, my advice is to take that chance and try it, even if you’ve got no idea what it is. Not only with you be able to discover something new, it would also be more fun that way, since you would not know what to expect, and therefore may be surprised at what you find when you taste it.

What is umeshu?
‘Ume’ is a Japanese plum that is one of the signs of early summer. Since the ume tree blossoms between late winter and early spring, this fruit can be harvested around the month of June, yielding bucket-loads of fruit each time. And being the usual norm of us humans, when we have too much of a seasonal harvest crop, we start getting creative with it. In Japan, ume is traditionally dried (to make umeboshi) or pickled (to make umezuke). Some may even turn it into a delicious alcoholic beverage (umeshu). Known as a cure for hangovers, a digestive aid and to prevent nausea, this fruit was also said to have been used by the samurai in ancient times to keep up their stamina and prevent fatigue. Imagine, this was the fruit of the samurai!

How to make umeshu (if they are available fresh in your area):
According to my Japanese friend who loves making homemade umeshu, you basically just need 4 things. Ume, some sort of alcohol (like brandy), sugar, and patience. Basically, you’re just supposed to place the ume, alcohol and sugar into any container, and that’s it. Here’s the difficult part, it takes at least 6 months before you can drink the final product. Therefore, there will a difficult mental challenge to be patient enough to wait before you can drink that delicious umeshu. If you think 6 months is long, try waiting for 5 to 10 years before you finally drink it. Impossible? Some people do it. Now that’s a lot of patience!

For more information on this drink, check out the Hakutsuru website (in Japanese)

If you want to know more about umeboshi and how to make it, I highly recommend this blog article which has lots of details and a step-by-step guide to making delicious umeboshi:
Just Hungry: http://justhungry.com/homemade-umeboshi-japanese-pickled-plums

Ps. Did you know that sake is the general name for all alcohols that you can find in Japan? That rice wine that you know as the Japanese ‘sake’ is actually called ‘nihonshu’ (‘nihon’ meaning Japan, and ‘shu’ meaning alcohol).