The Price of Presentation

February 15, 2018
Ever wondered why the exact same product has a higher price tag when it is packaged in a pretty box for the Christmas season, decorated with lots of hearts and kisses for a Valentine's Day gift, or simply because it is served in a high-end restaurant that presents it on an artfully arranged plate?

Well guess what? You are paying for the presentation!

I recently went to a mall which had both Sushi Zanmai and Pasta Zanmai outlets in Kuala Lumpur, Malaysia. For those who know it, and to those who don't, these two seemingly different restaurants are owned by the same company. Sneaky but smart business strategy, if you ask me.

As I was searching for lunch at that moment, I walked around the mall and found Pasta Zanmai on the fourth floor of the mall. Taking a look at their menu, right at bottom right corner of their January promotion was a dessert they called "lavender parfait", priced at RM 13. 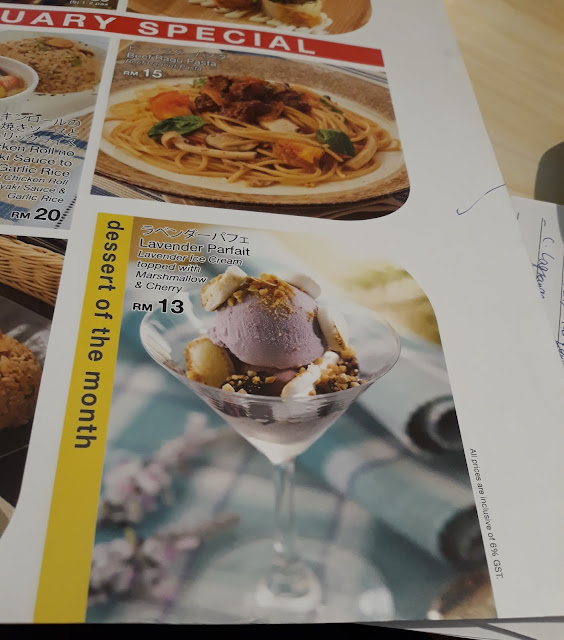 "Ooh, lavender ice cream! That would be interesting," I thought, "and the restaurant seemed to have a lovely and comfortable atmosphere despite the higher prices". However, as there were many other offerings at the mall, I decided to take a full round through all the available options before deciding which restaurant to enter.

Up on the fifth and topmost floor of the mall, there stood yet another restaurant with a similar name. "Sushi Zanmai", it was called. Compared to Pasta Zanmai, it had a simpler set up, was focused more on individual or at least small groups of diners (as shown by smaller, but a larger number of tables), and served food which didn't seem like they were about to burst your wallet. Sweeping through their menu at the entrance, I spotted "lavender ice cream" as one of their desserts, priced at RM 6.80. 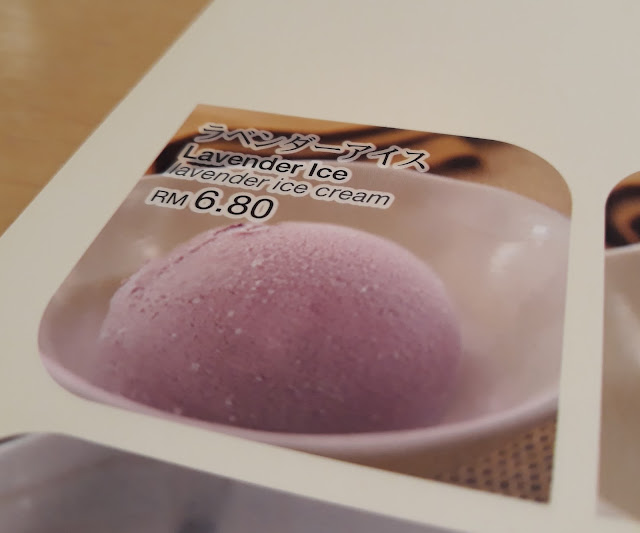 "Wait! Why does that look so familiar to me? That's right, I just saw it a few minutes ago at Pasta Zanmai," I thought, "but why is this one half the price of the other?"

Due to my curiosity, I decided to find out, for sure, the reason behind the difference. I went in to Sushi Zanmai first and had lunch before ordering their "lavender ice cream". As I expected, the place was bustling with business at lunchtime, noisy with the constant chatter of patrons, and had people waiting at the door for a seat. I felt uneasy as I ate, since I was constantly aware that I was taking up a space in their moderately-sized establishment. I felt even worse, since I was a single person sitting at a table with a 6-person capacity.

As to the lavender ice cream, it tasted quite good, albeit not having a stronger lavender aroma than I expected. A single scoop of purple-coloured ice cream in an ordinary white bowl and a metal spoon on the side. It didn't look like much, but at least the price was alright. 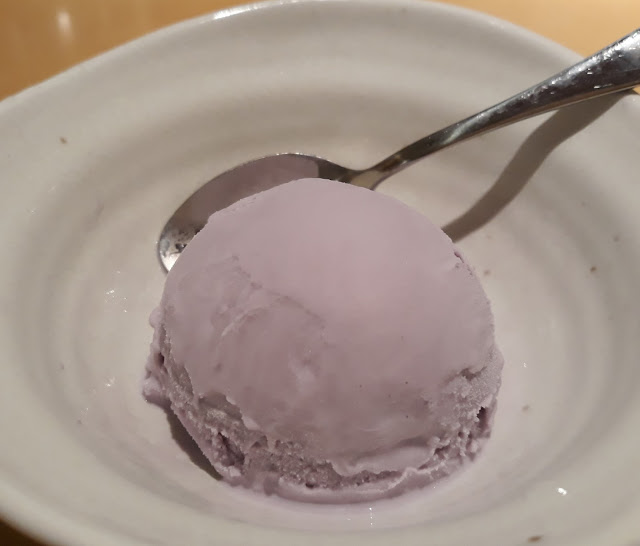 Next, I went to Pasta Zanmai and had THEIR version of the lavender dessert. After ordering the "lavender parfait", I sat back to relax and enjoy the atmosphere while nonchalantly flipping through the menu. With lesser, and more spacious tables, one can enjoy a quieter, more relaxing atmosphere and take one's time enjoying the food.

At the dessert section of the menu, I saw that they also served lavender ice cream, but what was surprising about this wasn't the fact that they had the exact same ice cream in both outlets, but that this one costed RM 7! That's 20 cents more for the same ice cream! 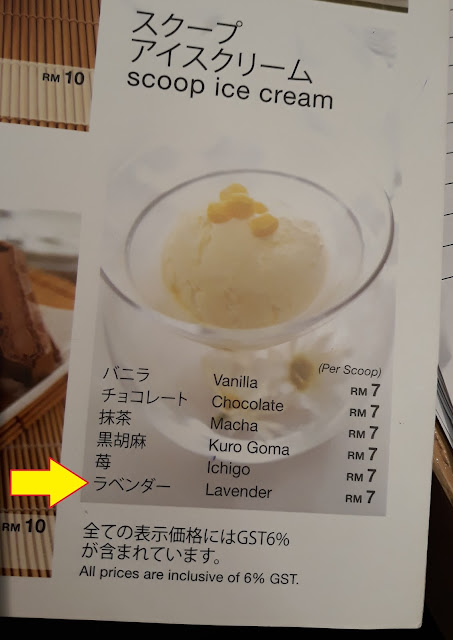 Before I go any further, let me briefly tell you about the lavender parfait so that you get the picture in a bit more detail. So this one had 2 scoops of ice cream instead of one (not bad), crunchy flour-based bits (which tasted a little like sweet pie crust), preserved cherries and toasted marshmallows. The lavender ice cream tasted suspiciously similar to the one I had at the previous shop, but I guess they use the same brand since they are from the same company. The combination was quite delicious, and the presentation, well, presentable. Served in a glass cup with a wide rim, a serviette-lined plate at the bottom and a spoon on the side. 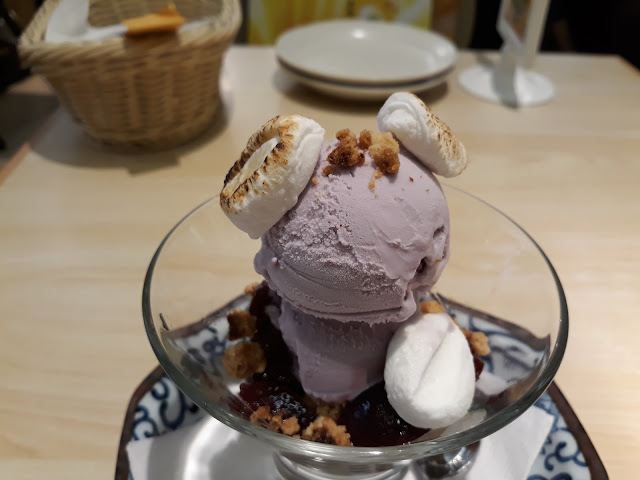 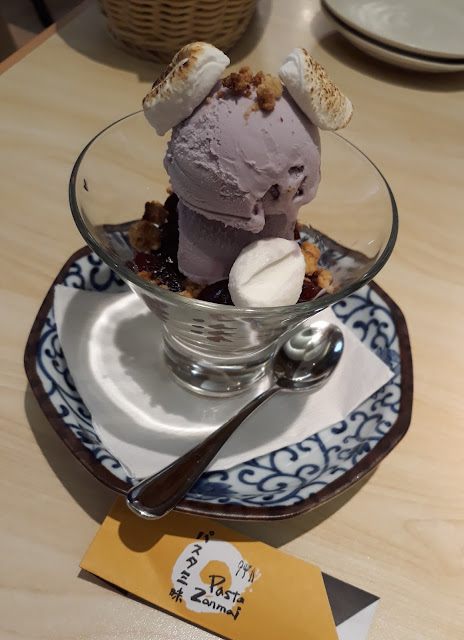 But what is it that makes all the difference? I understand that the lavender parfait had a few more things added to it, but was it worth hiking up the cost to two times its original price? And why does the exact same lavender ice cream cost differently in two restaurants owned by the same company.

I think it all boils down to one thing, we are paying for the presentation!

The nice and relaxing atmosphere coupled with the beautifully presented dish at Pasta Zanmai were, in my opinion, what they rationalized to be fitting for the price they were charging.

As a matter of fact, presentation is a very important element in the food and beverage industry. If your product, restaurant set-up or staff service didn't look good in the eyes of the customer, they probably won't be dining at your establishment very often. After all, they say that we eat with our eyes first, then with our mouths. Why else do food trends emerge, more often than not, because of numerous Instagram posts about how delicious that new food product or dish looks, and people suddenly having a craving for a burger just because they saw a photo posted on Facebook or a McDonald's advertisement on the Internet.

The difference between a meal at a 5-star restaurant and one at your local, small town restaurant? The presentation. Of course it is arguable that the quality of the food is higher and that they are more carefully prepared, but we must also remember that presentation is one of the factors they take into consideration when putting out those gold-plated prices too. For example, if we were to place cooked aglio olio spaghetti in a nice swirl right in the center of a sparkling clean plate, freshly grate some parmesan cheese on top of it, add a couple of cherry tomatoes and a sprinkle of fresh thyme on and around the spaghetti, and finally top it off with a basil leaf, we would probably say that there is a world of difference when compared to the exact same dish served by that hawker stall "auntie" who dumps cooked aglio olio spaghetti onto a random, coloured plastic plate with no decoration whatsoever. And guess what? The price will follow suit.

So the next time you are deciding whether or not to eat a certain dish at a restaurant, look around and see if there is a better offer around the corner. Unless you are looking for a nice and relaxing atmosphere to enjoy your food, there really isn't much of a point in paying the extra money. Then again, paying for atmosphere (or environment) is also another factor of pricing which can be further explained, but that's another story for another day.


For more information about Pasta Zanmai and Sushi Zanmai, visit their respective websites:


Hope you enjoyed this read. Do comment below to let me know your opinions and ideas.